Energy from Waste v Incineration. Are they the same thing?

The Americans call it, "trash", or, "garbage!" And in the UK in a business sense we call it commercial and industrial waste (C&I) or simply “rubbish”. These are everyday items that we use and then throw away. This includes; product packaging, food scraps, together with the container it came in, newspapers, coffee cups... A lot of it is all single use. Here in the UK, it was once a generally accepted practice to send waste straight to landfill.

Abundant landfill space was made available from declining mining activity so there was little incentive to explore other technologies or even prevent waste! Subsequently this put the UK behind our counterparts in Europe.

Early incinerators were used as a form of disposal, rather than seen as a source of energy. Waste entering these incinerators was not segregated (i.e. recyclables not removed) and there was little to no energy recovery. A messy business if you ask me, and not pleasant to be around. The public were not in favour, the legislators woke up, and they enforced tighter emissions standards; meaning no new incinerator plants were built between 1980 and 1993.

Things changed in the 90s, and there was a lot of emphasis placed on the potential impact of waste management on climate change. At this moment, landfill tax was initiated. This tax was used as a deterrent and thus incentivised other technologies for waste treatment; this drove the development of waste from energy plants. In a nutshell – an energy from waste plant uses waste as an input fuel, heat is generated, this heat is used to convert water to steam, steam turns a turbine and electricity is generated. Think of it as a conventional coal or nuclear power station, but the fuel is waste. 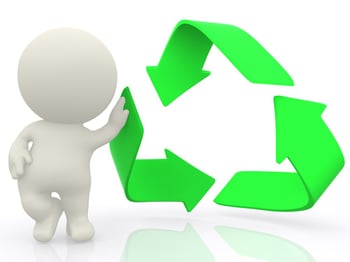 Now that there's a lot of emphasis on segregating waste at source in our homes and workplaces, waste contractors or our local councils provide different containers for different waste streams. These mechanisms certainly help to ensure that value is extracted from our waste. This waste may still contain some recyclables and generally goes off to material recycling facility (I’ll explain this more in another blog!) where various materials are separated.

According to Defra; residual waste is the material that remains after all possible recycling has been performed. At this point, the economics don’t warrant further effort to separate. This waste consists of plastics (made from oil) and a range of other biodegradable items i.e. food, paper (generally speaking). The energy generated from combusting residual waste is considered to be a low carbon and partially renewable energy source. Whilst this all sounds like a suitable option, it’s not really. In a perfect world, all waste would be prevented. But this isn’t always practical or possible. The logical process is to primarily prevent waste from entering the system, the next best thing would be to reuse and then to finally recycle, in line with the waste hierarchy.

If you want to find out more about how you can reduce your waste liability – get in touch with me below.