How to Set Science-Based Targets for Reducing GHG Emissions

What are science based targets, which organisations use them, and how can you set them for your own business to reduce GHG emissions?

What are science-based targets?

Setting science-based targets is a key part of ESG (environmental, social, and governance) initiatives, as it takes ESG disclosures one step further — from transparency to action and from reporting to making meaningful change.

What is the Science-Based Targets initiative (SBTi)?

The Science Based Targets initiative, or SBTi, is the result of a joint partnership formed in 2015 between CDP, the United Nations Global Compact (UNGC), World Resources Institute (WRI), and the World Wide Fund for Nature (WWF).

Although other “science-based targets” exist, the term most often refers to this specific program, which is primarily focused on driving down greenhouse gas emissions in line with the goals of the Paris Agreement.

SBTi helps organisations learn how to develop and stick to science-based targets by independently assessing and approving a company’s goals.

The ultimate goal of SBTi is to make science-based targets standard business practice, so that all organisations are involved in mitigating and reducing greenhouse gas emissions. So far, more than 1,000 companies have joined this initiative. And, according to analysis by SBTi, organisations plan to invest more than $25.9 billion USD in climate mitigation aligned with these targets through 2030.

What companies use science-based targets?

It’s important to note that not every organisation that opts into SBTi is making the exact same pledge. The initiative allows participants to decide which warming scenario they want to align with. While not all businesses have the capacity to align with the 1.5°C scenario, the discretionary nature could potentially lead capable organisations to needlessly reduce their targets. 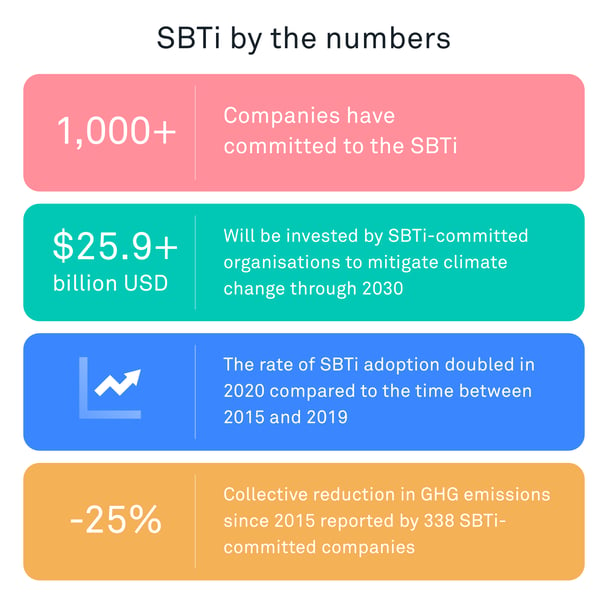 How to set science-based targets

SBTi provides robust guidance and resources like commitment letters, case studies, and workshops to minimise as many barriers as possible to the adoption of science-based targets.

Although the science-based targets from SBTi are specifically related to greenhouse gas emissions, businesses can and should set targets for other parts of their ESG policy as well.

Organisations such as Science Based Targets Network are working on developing targets for other areas, such as how to protect and restore nature in line with science.

Using sustainability software like Rio can help you set, adhere to, and report on science-based targets.

With robust data analysis and ESG governance tools, as well as automated reporting based on leading ESG frameworks, Rio helps businesses stick to their targets and track progress. Rio even tracks the associated carbon footprint of all monitored activity automatically.

You can read more about SBTi and 22 other frameworks, laws, regulations, and indices in our ESG framework guide.