New tools and strategies are required to address biodiversity

Popular understanding of biodiversity and nature-based solutions remains in its relative infancy, but these are issues companies and investors will need to become increasingly comfortable with in the very near future. Anna Chilton of Rio ESG explains why their future – and the future of the planet as a whole – may depend upon getting this process right.

In July, the United Nations General Assembly declared that everyone has the right to live in a healthy, sustainable environment. In so doing, it recognised that the well-being of our society is inextricably bound to the functions of the natural world.

Biodiversity is becoming something of a buzzword as global standard-setters turn their attention to the urgent problem of rapidly deteriorating ecosystems.

So far, however, the record looks bleak. The World Wildlife Fund’s ‘The Living Planet Report 2022’ states that global wildlife populations have fallen by 69% on average since 1970. And scientists estimate that only about 75% of the world’s biodiversity is intact – far below the threshold of 90% considered safe.

Attempts to limit this precipitous loss of biodiversity have fallen short of the mark. Only four of the goals set for 2020 by the Aichi Biodiversity Standards were partially met; 16 were missed entirely.

“It is very disappointing, that we didn’t hit those targets, and shows how much progress is required in terms of biodiversity accounting and management,” says Anna Chilton of Rio ESG.

“Fortunately, biodiversity and nature-based solutions are becoming significant talking points at the UN and the World Bank, and there are plenty of reports being written at the moment following the Taskforce on Nature-related Financial Disclosures (TNFD) and other, similar standards. Still, we’re probably about ten years behind the level we’ve reached on measuring carbon emissions.”

Chilton is candid about the limitations of the guidelines being developed for investors and corporations, which will be the next step on the path to targeted action from the markets on biodiversity restoration.

“How long do companies need to get to grips with biodiversity accounting?” Chilton asks. “I’m not sure, but certainly over the next three to five years we’ll see more and more companies grappling with this issue.”

In order to help outline some of the challenges and opportunites organisations and investors face, Chilton has recently authored Rio ESG’s “Guide to Biodiversity & Nature-based Solutions for Financial Professionals”, outlining the key nature-related topics for financial professionals to be aware of; reviewing the current and future landscape of reporting, accounting, and legislation; and pointing readers in the direction of useful resources. 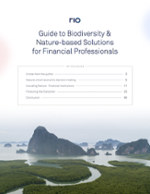 Given that a healthy natural environment is a fundamental prerequisite for economic growth, this is not an area that businesses can afford to ignore.

The problem, Chilton explains, is that the focus on carbon emissionscan often eclipse more nuanced environmental truths, which only a granular analysis of a company’s biodiversity footprint can uncover.

“Let’s say you’ve got an agricultural site and you’re spraying glyphosate, which is a widely used agrochemical,” Chilton begins. “The emissions for distributing glyphosate can be offset. On paper, the company can claim carbon neutrality, while the ecological damage to soil, biodiversity, local waterways and people, remains ‘unaccounted’ for.

“These external pressures remain under the radar and yet they are material for investors as they add layers of risk. We are seeing wide adoption of the concept of ‘double materiality’, which means accounting for ‘externalities’ (external pressures to nature and society from organisational activities). This means that ‘hidden’ impacts will have to be integrated into the business case and may directly impact profitability.

“The UN and other policymakers recognise the ways in which biodiversity supports resilience against climate change. The policy landscape is moving quickly in the direction of biodiversity protection, and, I believe, we will see more and more biodiversity conservation laws in the near term.”

Biodiversity accounting serves to prevent blind spots in a company’s investment case by furnishing investors with information about its dependence on ecosystem services.

“That’s not always seen in a positive light because it adds complexity to an already highly complex topic – sustainability,” Chilton says. “Biodiversity is seen by many in the investment space as another factor to get to grips with. It is universally accepted as a highly complex topic, requiring new approaches and processes, such as location-specific data and a landscape approach.

“There is a considerable gap in available data from the underlying companies and data providers, which can lead to largely estimated data, with considerable data inaccuracies. The tools to gather and interpret biodiversity data are also largely under development.”

Given that the dependence of a business on ecosystem services varies hugely by geography and sector, it can be very difficult to put a number on biodiversity risk. Without standardised methodology, investors trying to calculate the footprint of their portfolio have no way of knowing that the data they are collecting is useful. Nor is it obvious to companies how to audit their data even if they want to.

Representing the interests of biodiversity

Despite all of these hurdles, this topic offers opportunities to bring novel solutions to the market and first-mover advantages.

“Nature doesn’t have a board seat in organisations, but it is speaking volumes in other ways. Climate change is having a direct impact on certain industries, such as insurance,” Chilton observes. “One of the key talking points at Cop27 has been catastrophe resilience. Extreme weather events – fires, floods, etcetera – are exasperated by climate change and biodiversity loss. Perhaps ironically, it is nature that stands to bring the more efficient and cost-effective solutions to those issues.”

Aware that nature-based solutions terminology can inhibit understanding, Chilton elaborates, “Because the term ‘nature-based solutions’ is used so much, people kind of switch off and have no idea what it means. But it’s simple: these are processes reliant on nature for the benefit of society.”

Returning to the example of soil degradation, Chilton suggests some disarmingly simple nature-based solutions, including planting cover crops, the roots of which prevent topsoil from washing away, or eschewing chemicals that kill life in the soil. “When the soil is teaming with life, it has greater water-holding capacity, it acts like a sponge. In the event of a deluge – more common due to climate change – the topsoil is more resilient against erosion.”

Mangrove trees are another illustration. Their above-ground roots trap sediment and buffer waves. Consequently, coastal areas that are prone to flooding will thrive more in the proximity of a mangrove forest.

“House prices go up. Insurance premiums stay relatively neutral. The government saves money on coastal defences, and you can have more economic development in that area because it’s less vulnerable to flooding. Yet another example of nature helping us,” says Chilton.

The World Economic Forum estimates that humans derive about $125trn of value from natural ecosystems each year. It is therefore unsurprising that experts are embracing increasingly innovative approaches to the problem as biodiversity loss accelerates.

“The cutting edge of thought in this field is to see ecosystem services through the lens of local communities and indigenous people, who have deep knowledge that may have been discounted in the past,” Chilton observes.

“I worked with a company that noticed a loss of natural habitats around its plantation. Monitoring with satellite systems and drones can be very costly. So we started a dialogue with local communities about protecting the forest. They had invaluable knowledge about indigenous plants. The indigenous tree varieties that we substituted for eucalyptus took a little longer to grow, but they increased biodiversity and provided the local community with a sustainable supply of firewood. Working with locals and understanding their needs also minimised the risk of land encroachment and made it easier to recruit a local workforce.

“Biodiversity is known for many things, but it is less commonly understood that it has a big role as a connector,” Chilton continues. “Something as simple as a bird eating a piece of fruit can bring plants to new areas. It’s really hard to put a value on that.”

Banks have now begun appointing their first ‘heads of biodiversity’, and one could be forgiven for thinking that the task that confronts them is a little daunting. If the regional variations between the world’s ecosystems are what makes this planet so abundant, they are also the greatest obstacle to any standardised methodology for measuring biodiversity impact. Chilton believes that any productive approach to biodiversity must account for all the local and sectoral peculiarities of biodiversity dependencies. “My advice to companies and institutions approaching this challenge?” she surmises. “Embrace complexity.”

This article has been published in Capital Monitor