On November 29th I was invited to join Liz Bonnin, BBC environmental documentarist, to talk at the Royal Geographic Society on how we as a Planet are ‘drowning in plastics’ a documentary originally produced by the BBC in September. The panel discussion included Richard Thompson, Marine Biologist, Sian Sutherland, Co-Founder of A Plastics Planet and Research, Stephanie Wright from Kings College London.

Liz opened the event illustrating how plastics have entered every part of our lives, from oceans to small villages in Indonesia. 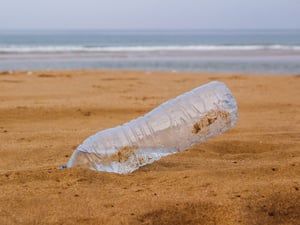 Liz invited to the panel to offer solutions on how we change the rise in plastic waste. We know that plastic is everywhere, in the air, in our soil, our food, intestines and drinking water. As yet we do not know the health impact of this pollution, but from the examples, Liz gave of the impact of on bird life, I think it is safe to say plastics will be a grave threat to human health.

Plastics use is growing. Today 320 million tonnes of plastic is used with an expected increase to over 500 million tonnes by 2050. It is also well documented that plastic will become cheaper thereby reducing the likelihood of other materials being used in its place. Forty per cent of plastics are thrown away after just one use, yet the waste lasts in the environment for eternity. In short, if the current status quo continues, we are going to keep drowning in plastic.

It is fair to say that I am a cynic and I have seen enough tokenism from oil companies, tobacco, asbestos, chemical, food, and clothing industries to believe that without radical policies we will fail to make a change. History tells us that asking companies to change these policies does not work, yet enforcing legislation has an immediate effect. For example, asking petrol companies to reduce lead in petrol got us nowhere. Banning lead in petrol stopped its use overnight; the same enforcement can and should happen in the production of plastic in the sense that we need forceful Government intervention to reduce plastics use and pollution, not voluntary agreements.

There is, however, no doubt that we do need plastic, therefore, the question is, how can we minimise the impact of ‘throw away’ plastic packaging?

During the conversation, I suggested to Liz that rather than simply seeing plastic washed up on the beach as waste, what she was actually looking at was 'negative value.' The waste on the beach has such a negative value that it is not recycled. To overcome negative value, we need to create positive value. Many countries in Europe have achieved this by introducing the Deposit Return Schemes, or Extended Producer Responsibility programmes that force producers to invest in a scheme to pay for the collection and recovery of plastic waste.

Under the Deposit Return Scheme, each packaging product has a value of roughly between 50 - 10 cents per bottle. This is the deposit the customer pays when they buy the product and the amount they are refunded when they return the empty container to the place of purchase. In Finland, every shop is obligated to accept the product and refund your money.  The result, the streets of Finland are spotless.

Another form of financial incentive is through EPR; a scheme set up so that the producer of the waste pays a specific sum into a fund which is distributed to councils and waste operators to ensure the packaging is collected and treated. In Germany, around €1.5 billion is paid into the fund by packaging producers, in Italy around €700 million. These monies ensure waste is collected and treated properly. In the UK we pay around £80 million, not enough to have much effect. In the Third World, there are no such schemes, neither DRS nor EPR. Therefore, there is no value in the waste and as a result, it ends up in our oceans.

In order to avoid stopping us all ‘drowning in plastic,’ we must introduce new taxes on plastic, globally, enabling countries to collect and safely dispose of the waste. In the UK I helped propose to the Treasury a 10p per kilo tax on plastic polymers to create a   fund of 200/300 million pounds to clean up plastic waste and impose preventative measures. A Plastic Planet, the association delivered the proposal to the Chancellor who subsequently announced his approval in the last budget. This is a start in ensuring the plastics industry stands up to its responsibilities and puts its money where it is most needed, not in propaganda to defend their behaviour but in actions to stop the increase of plastic waste once and for all.

Time is not on our side, during the time it took for you to read this article, one truckload of plastic waste was dumped into the oceans.  A disaster of epic proportions. Credit to Liz Bonnin for making sure we cannot say, “we didn’t know”